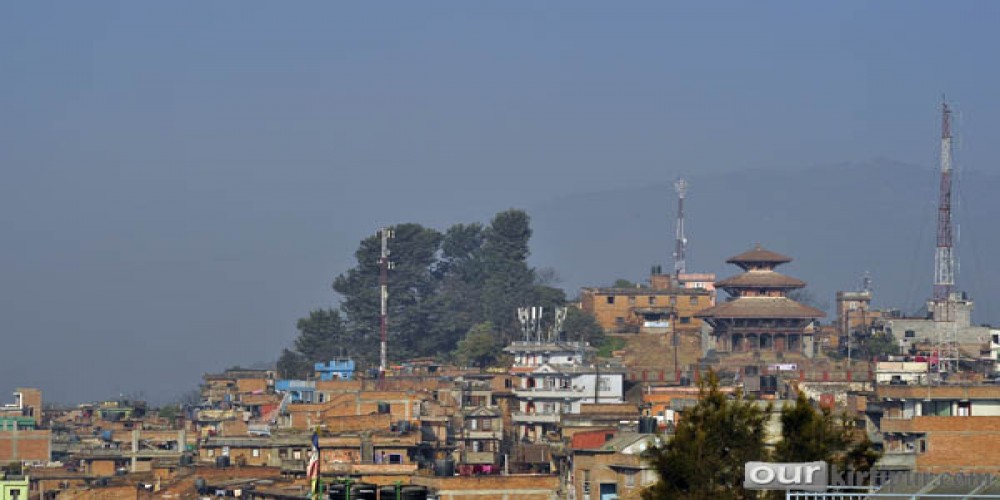 Uma Maheshwor temple (locally, Kwacho Dega) is one of the important heritage sites of Kirtipur. This pagoda-style three-storied temple is situated at the highest point (1414 m) of Kirtipur. Since this temple is at the top of the hill, one can enjoy picturesque view of the Kathmandu valley and mountains like Langtang, Dorge Lakkpa, Chobhu Bhamure, and Gaurishankar.

The temple was constructed in 1655 AD by Rautra Vishwanath Babu, a son of king Sidhhi Narsinga Malla. It was destructed in an earthquake in 1832 AD. After remained dilapidated for about a century, it was restored in 1933 AD after it was again destroyed by an earthquake.  Local people and government made a herculean effort to renovate it into the current state. The restoration process was completed only in 1982 AD.  Recently, in 2008 some work was done to preserve the arts of temple.

There is an artistic stone gate at the entrance. On each side of the stone staircase leading to the temple, there is a stone elephant, with sculptures of Bhimsen and Kuber as protectors of the temple. The main deities in this temple are standing Lord Shiva and Parvati. There are other images of deities like Sarasvati and Mahismardini on false doors around temple.

The bell on the northern side of temple was cast in 1895 by Gillett & Johnston Founders, Corydon. It was one of the four quarter bells of Ghantaghar of the central Kathmandu and was was reallocated to this temple after the Ghantaghar was destroyed by the earthquake in 1933.