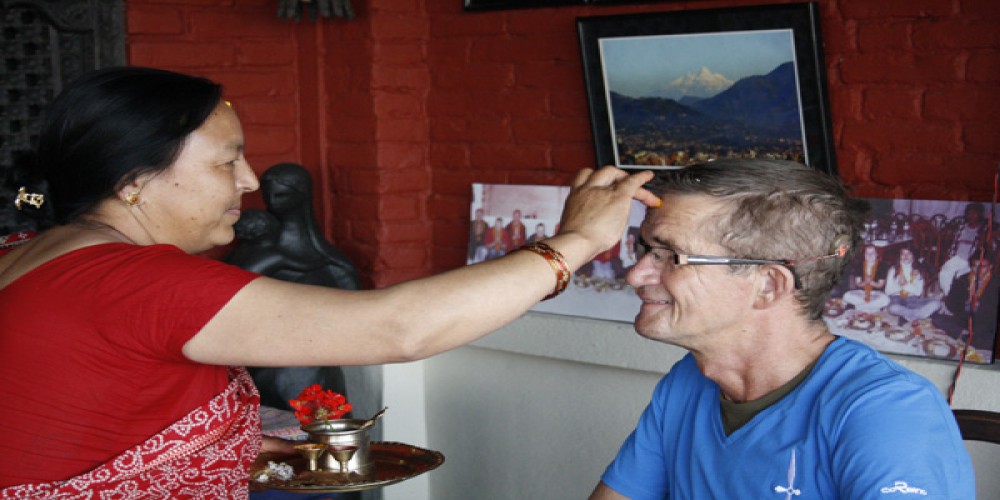 Welcoming guests with roasted fish, boiled egg and a Sal?chah full of local alcohol is the cultural identity of Newari people. Kirtipur Hillside Hotel has owned this style as the signature hospitality for every arriving guest. Located at the Northern end of the Kirtipur hill, Kirtipur Hillside Hotel is well known for the finest cuisines and accommodation in Kirtipur.

In 2003, two brothers, Bijay and Ajay Maharjan from Chithu, Kirtipur established this hotel at their home as a family business. By profession, Bijay is an architect and Ajay is a physiotherapist. However, they had an idea that this hotel business can be the turning point in their career. Before starting this business, they had another business in which they provided rooms for rent. Since the largest university of the country, Tribhuwan University, lies in Kirtipur and so the students from all over the country come here for higher university studies, 'rooms for rent' was quite a popular business even then. However, Mr. Rupak Maharjan, a tour guide and friend of Mr. Ajay Maharjan, suggested them to start a business where they provide rooms for traveling tourists rather than in-trend rooms for rent business. They felt the advice as an inspirational one and so started building rooms providing the facilities that met the criteria of a standard hotel and began a venture which is now established as the only hotel in Kirtipur Municipality.

Unlike the other hoteliers, however, Maharjan brothers had a nervous start in the business. On October 17, 2003, on the very first day of the hotel business, Mr. Rupak Maharjan brought 18 German tourists occupying all 9 rooms they had started the business with. This provided them the motivation to provide top quality service for the first ever guests. Although they had a shaky start, they didn't compromise with the services they provided.

Within a year of starting the business, Maharjan brothers faced big challenges for three years, from the beginning of 2004 until the end of 2006, due to the political instability in the country. Tourism was the sector that was hit the most by the Maoist insurgency and Maharjan bothers' business wasn't an exception. Barely few tourists visited the hotel which made it difficult to continue the business and even to pay salaries to the staffs. Due to these difficult circumstances, Maharjan brothers were once in a confusion whether to continue or to leave the business and get back to the 'rooms for rent' business. But they worked on it with patience and their patience paid off after the April uprising in 2006 which led to the re-establishment of 'peace' in the country through 'Peace Agreement' between the rebels and then ruling parties. Then their business slowly picked up again. They had started the hotel with 9 rooms along with a dining hall. After 11 years of the establishment, now they have 27 rooms with 50 beds; 2 conference halls, one with the capacity of 150 seats and another with the capacity of 15 seats; and a cozy roof-top restaurant.

Because the Hotel is conveniently located near Tribhuwan University, it has been an attraction to the professors, philosophers and scientists of the university. And hence, it is slowly picking itself up as an intellectual hub among those intellects. The availability of conference halls has made it easy for organizing different events and seminars. Popularity of Kirtipur as one of the most important historical places in the country because of the repeated defeats of Prithvi Narayan Shah during his 'unification campaign' at the hands of Kirtipur soldiers has made the Hotel famous among the internal tourists as well.


The hotel is popular among internal and international tourists not only due to the location of the hotel, but also for the cuisines that depict the Newar culture. Gwarch?h, Chatãmari, Yo:mari, Wo: and Samay Baji are typical Newari dishes served to the connoisseur guests. D?l Bh?t, the ever-popular Nepali dish, along with Continental, Italian and Chinese foods are also served as per the demands. The phenomenal panoramic view of Kathmandu city and Langtang Himalayan range on a clear day adds to the distinguished taste of Newari cuisines.

In these 11 years journey of Kirtipur Hillside Hotel, Maharjan brothers have perfected their management, services and hospitality of the hotel. Not only are they concerned about the business, but they are conscious towards their social responsibility as well. Hence, for Corporate Social Responsibility, they have been providing scholarship for school students, organizing health camps and, in collaboration with Mr. Paul, a Dutch citizen, providing hearing aids for hearing-impaired people. They are also concerned about improving the tourism of Kirtipur.