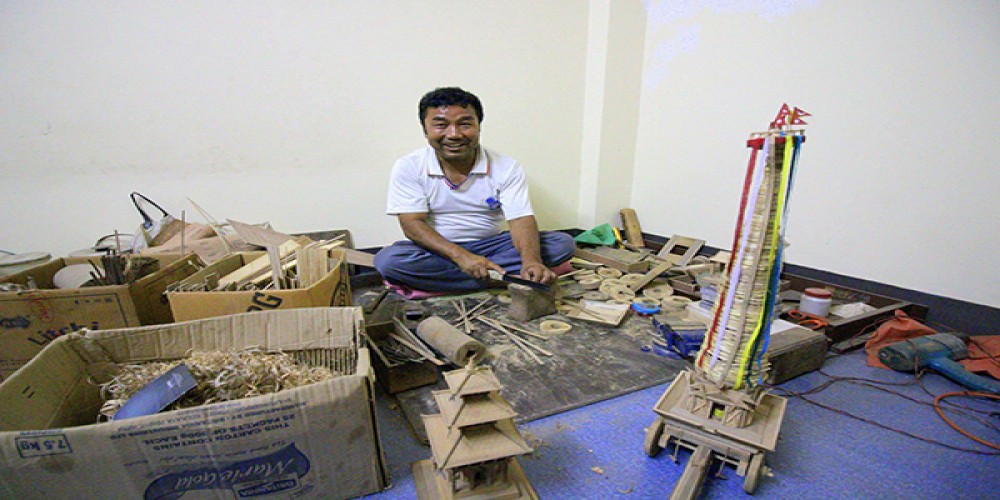 As an old saying keeps ‘a tree waits for many years to be in the hands of carpenter to be turned into a beautiful piece of furniture’, it might be something similar for the bamboos when Muktinath Maharjan carves them into the finest miniatures of the world-class temples around Kathmandu valley.

A self-taught artisan Muktinath, 50 is a local resident from Ta:nani:, Kirtipur and professionally a carpenter. He first learnt the art of crafting miniatures by observing a friend in Aankha Chen: working discretely on the miniatures some 30 years back. Muktinath recalls how he was moved to see his friend caressingly crafting the temple miniature, “he was so deeply concentrated on that temple miniature and how beautiful it looked that it influenced me deeply and how eagerly I wanted to learn it”. After a request then, his friend gave Muktinath some brief lessons about the crafting. After that the passionate Muktinath practiced carving a lot and only after uncountable failures, he was able to give a miniature an artisan’s touch. He recalls a funny incident of his hits-and-misses of mastering the detail carvings into the miniature temples, that once he used super-glue to stick together the tiny bamboo pieces and how it got glued to his fingers and had struggled to free it, meanwhile, he was been called for dinner.

Nostalgia embraces him as he shared that how his sister wanted the first of his creation –miniature of Kwacho degah: (Uma-maheshwor temple) as a wedding gift and how happy he was to give it to her. Back then he was living in a traditional Newar house and faced lots of issues of space to work and store his creations. It seemed as if even the rats had tremendous appreciation to his master pieces that they would chew them up, but their amour only had unwelcomed random carvings and holes from the rodent teeth on the miniatures Muktinath had put together. One of such miniature of a Phalcha: as old as 30 years is still beautifully showcased in his house. The rodent carvings don’t look bad, if not good! This doesn’t do anything to make Muktinath sad, but helps him to rejoice his youthful days when he was engraved into the miniature makings.

Born into a Newar farmer family of Maharjans, Muktinath is a natural artist. A traditional Newari flute and Khi: (traditional Newari drum) player, and actor from his early days have been living an artistically influential life and had bagged many awards for his performances. His eyes glaze in joy when he narrates how his younger son, Rabindra, 26, who is now a graduate in Ethno-musicology from the Kathmandu University and a professional bamboo flautist how he used to listen to him as if spell-bounded while playing Newari flute when he was a kid and perhaps tempted to be a musician himself.

A world-class masterwork that Muktinath stopped due to his naïvely ignorance on marketing, is now at present days, his son, Rabindra has become a driving force of motivation to revive Muktinath’s miniature crafting after almost 20 years of gap. He has also created a Facebook page entitled “Mukti Crafts” for his father. Overwhelming responses have been receiving on the FB page and have been able to sell some of the miniatures. Six months ago, an exporter of the Nepali handicrafts had also offered him for exhibiting Muktinath’s miniature temples abroad but untimely demise of the exporter strangled this project aside.

Presently, he has the perfect miniatures of Nyatapol mandir of Bhaktapur, Bagh Bhairab of Kirtipur, and a splendid chariot of Rato Machindranath, Uma-maheshwor and numerous Falcha. Gracious Muktinath has gifted his creations more to his relatives and friends rather than selling.

A perfect décor, souvenir piece and simply a flawless reflection of creativity and passion, Muktinath’s miniatures are crafted out of dried bamboo with the use of his special equipment for carving. One of the most astonishing facts of these crafts is that Muktinath hasn’t done any mathematical metrics of the real temples to create his miniature, but based on his visual observation and memories, yet the miniatures look so alive and symmetrical.

As eager as when he was learning this art as a youth, Muktinath has the same zeal to train others too, this art of rarity.