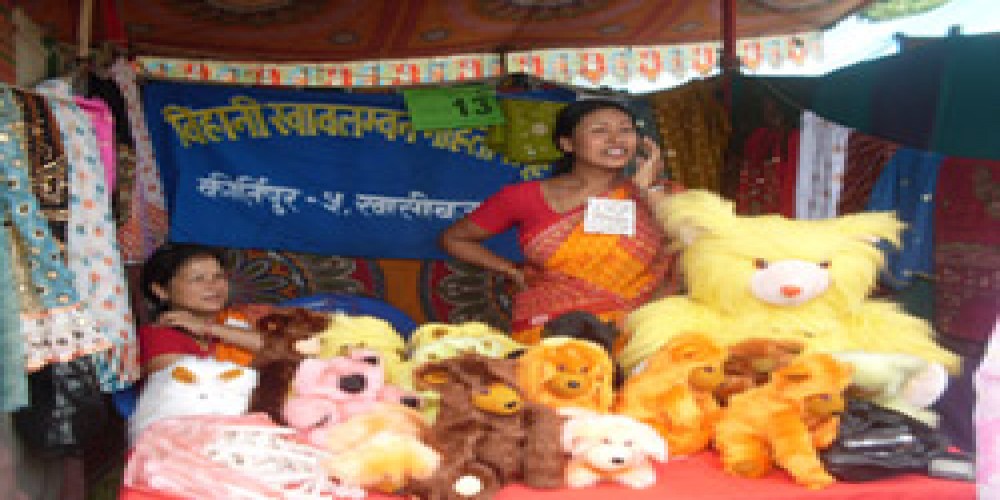 Durga Laxmi Maharjan is not among those housewives who captivate themselves amid the four confined walls of their houses, spend their entire life serving their family members and depend on their husbands even for petty expenses. She is indeed an exemplary model for those housewives mentioned above. Maharjan, aged 41, lives in Kirtipur, Khasi Bazaar, ward no. 5 with her three children, husband and in-laws.

Apart from being a responsible housekeeper, she also manages to operate small businesses in her house herself. She has taken trainings for the preparation of soaps, incense, pickles and preservatives, candles, etc. She has also learned the techniques for sewing and doll-making. She is currently indulged in doll-making business. She prepares the stuffed toys and sells them in Mahabouddha, a major area in the city for wholesale marketing. Nowadays, she is constantly invited by various organizations to give trainings to other women on the techniques of doll-making. For this, she gets paid by the organizations on the daily basis.

Durga laxmi Maharjan is also a secretary of Bihan Mahila Samuha, Kirtipur. This group provides loan to the women who are in urgent need of money and also encourages them to start up a business of their own through financial help. She is also an active member of Kirtipur Mahila Sanjal, an association which conducts many women empowering activities. She works as a local entrepreneur for Herbo Intl. Pvt. Ltd., an organization which does the global marketing of herbal products produced in Nepal. She has also been serving as a volunteer in several occasions.

Her awe- inspiring contribution to the society has made her quite a popular figure in Kirtipur. Her indulgence in all these activities has helped her to develop her confidence and has enabled her to contribute to her family economically. She deliberately points out the challenges faced by her. She explains how the market is growing competitive and the consequent effects on her sale. Durga, who couldn't excel more than I.A. in her studies due to her marriage, believes that the society should change the tradition of early marriage. If her parents had postponed her marriage or she had been provided with the opportunity to continue her studies even after marriage, she could have achieved a whole lot more.

Nonetheless, she definitely sets an example among those housewives who don't have enough stamina to work independently like her.