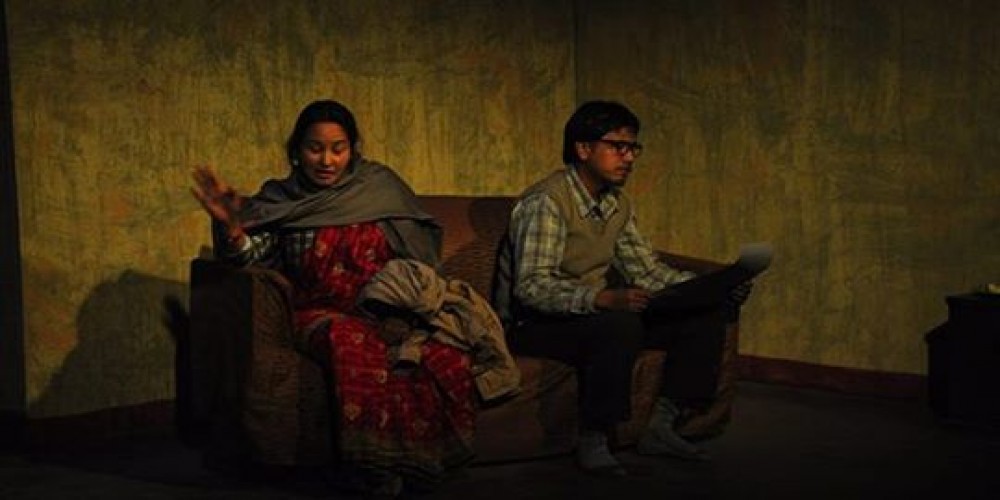 Everybody is hungry at home. The countless 'plans' Narabahadur (played by Akash Magar) had designed have never worked. This has left Mandira (played by Shanti Giri), Narabahadur's wife, in utter disappointment. All she can think of right now is food; all she can talk about right now is food. A sociology-enthusiast Rajendra (played by Sudam CK), Narabahadur and Mandira's son, has been theorizing the cause of their poverty. Sarita (played by Sanjita Sanji), the daughter, is in her own world of fairytale, where she is a princess, her family the royal family and Tankaman (played by Abhaya Baral), to whom they are in debt, is a monster.

Bhoko Ghar, a play written by Govinda Bahadur Malla some 40 years ago, is equally relevant to today's society. Youth theater artist Kedar Shrestha has beautifully reimagined the play in the contemporary context. The play depicts the problems faced by the lower-middle class family in today's urban/sub-urban society.

"It portrays the necessities of a middle-class family, their dreams, their ambitions; there are their problems and accidents as consequence." Director Shrestha writes in the play catalogue.

The middle-class family establish the urban and suburban society of Nepal. They are the backbone of the country, for the large part of the country's economy is held by the remittance earned by the middle-class in gulf countries. But the economic problems they face sometimes go unnoticed.

"The play has uncovered the fact of how a lower-middle class family is shattered and is left in ruins as a 'hungry house' and hence has exposed the urban society," Tulsi Dass Maharjan, the editor of emulyankan.com, writes.

The story itself doesn't have much weight. And that is the beauty of going to a theatre for a play. The emotion displayed by the characters is what attracts the audience. Bhoko Ghar is not an exception. And that's where we see Mr. Shrestha's talent. The level of emotion displayed by the actors is astonishing. The effect of music, the shadow-art to illustrate the 'fairytale' Sarita imagines, the dialogues and every other aspect, even the lighting, glue the audience to their seats. And the feeling of emptiness and sorrow in the realization of the message the play wants to convey leaves the audience to question themselves, "Is this the society we want to create? Is this the society we want our children to grow in?" And that, I believe, is the ultimate success of the play. Bhoko Ghar has left me hungry for more.

Bhoko Ghar (The Hungry House) is being played in Theater Mall, Kathmandu Mall every day (except Saturdays) at 5 pm (1:30 pm on Wednesdays) till Poush 23.